In August 2017, I started my post-doctoral fellowship in the city of Bloemfontein, South Africa. A year prior, I visited the city and the campus because I did not want to go to a place not knowing what to expect. Once I found out what to expect, I decided to go anyway. 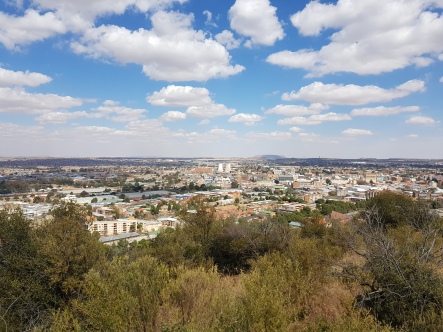 In a place characterized by division, stark racism, violence and conservatism, I found amazing stories of progressive thought, friendship and courage. Stories of ‘locals’, stories of migrants, stories of people crossing boundaries that are much less rigid than one might assume at first sight. I found these stories because, even though I was told not to leave campus, for it would not be safe, I decided to go out every once in a while.

To protect the anonymity of protagonists, many of these stories have a fictional component, but they are rooted in the reality of a city that, as soon as you leave it, seems like a surreal mirage that only exists in your imagination.

The city centre becomes busy on Saturday. All of a sudden, Bloemfontein looks like any other African city, the hustling and bustling of shops, people crossing the street where ever they please, people shopping and chatting on the street. Most shops in town are run by the Ethiopian or “Habesha” community. The language mix in the shops is fascinating. Shop keepers employ a mix of Habeshas and South Africans and mutual learning takes place constantly. The shop keepers speak Amharic, English and have a basic command of Sesotho, while their staff, largely fluent in Sesotho and English, will speak Amharic with the customers they identify as Ethiopian. There is no fear of making mistakes, South African staff will happily throw in the odd Amharic word (qonjo, salamnew, tinish, kamis, chama…).

Most foreigners or even white South Africans (if they ever set foot in these stores, which, based on how staff reacted to my presence, seems improbable) are likely oblivious to this complex mix of languages and cultures, as they will perceive all people in the shop as belonging to the same group: ‘black people‘. There was no hostility towards me in the city centre. Indeed, my very presence there seemed to indicate that I was somehow weird, not South African, a different kind of “other” than the one people react to negatively in this context.

Alamnesh wants to buy a dress for church. She tries on several, all pink. She does not like anything with too many complications, she prefers simple designs without lace or buttons. The dress has to be long. “I short” she complains every time she tries on a dress that inevitably ends up being way too long for her. She also needs shoes. And eyeliner. And lip balm. But the transparent one, not the one with colour. I suspect that all this is for church. There is considerable excitement about going to church tomorrow. I agreed to drive them to mass, they normally cannot go there as it is out of town and starts at 6am. We leave without buying a dress but she has another one at home. Later on, they will tell me again that I don’t have to take them to church, that it is fine, no big deal, I can just sleep in the morning. But I know that all the preparations being made are based on the assumption that I will be there tomorrow morning.

Yonatan owns the clothes store. He speaks Amharic, English and Sesotho (main use case: yelling at his staff). One of his employees in particular is eager to speak in Amharic, although she knows barely more than a few words. To work at one of the shops in town, Alamnesh needs to learn English. Maybe in a few months she will also know some Sesotho. It is not language mastery in the sense we understand it in interpreting, rather, what is happening is rapport-building through language, similar to what we find in anthropology. The language is mastered enough to make the interlocutor trust you, to show them “I am similar to you, I respect you, I am interested in your way of being, in who you are, you can trust me.”

Learning a language is a way of acknowledging each others’ humanity. Nothing more but nothing less.

The two girls in the shoe shop laugh when they see me. Then exchange a few words in a language I cannot understand before looking at me again. “Whitey” one of them says in my direction, laughing. Whitey. Blunt like that. They do not even try to sugar coat the fact that I am wearing the wrong skin colour for the occasion. But she does not say it in a demeaning way, rather, she says it in an encouraging way, in a ‘we are surprised but happy to see you here’ kind of way. I laugh with them and reply “Yes, apparently. Nothing I can do to change that, can I?” They laugh. “No, true, you can’t. But it is good. Welcome.”

Hair is cut, shaved and braided on the sidewalk, in broad daylight, next to small stalls where women sell goat (or sheep?) heads and feet in transparent plastic bags. I have never seen this kind of open air hair dressing in a large town, it somehow makes the city centre look poorer and more miserable. The strands of hair and extensions on the sidewalk give the street a somewhat sinister look. My brain creates associations with piles of human hair seen on photos taken in a different context decades ago – a context I have spent more time than usual thinking about since I arrived in Bloemfontein.

One of the shops has hired a DJ. He stands at the entrance with his mixing table, over-saturated loudspeakers blasting Hip Hop beats onto the sidewalk. A man who looks both drunk and homeless dances to the music as if his life depended on it. Like the loudspeakers, he is having a blast. Some passers-by laugh and enjoy the spectacle, others ignore the guy as if he was the most normal thing in their world. The DJ looks at me, pleadingly, as if wanting to apologize that I have to witness this. And yet,this is what I came to see. Just life on a Saturday morning.

“Do you like this city?” Alamnesh asks me. I want to say no. I think of the strands of hair on the sidewalk, the goat (sheep?) heads being sold in transparent plastic bags, without skin but with teeth, the three keys, two remote controls and one access card that separates my room from my office, the constant reminders that people are out to rob and rape you, that it is not safe. But I do not want to discourage her, after all, she has to live here and is likely to give birth to a child in this town. “It’s okay, I think I will get used to it.” My reply is half affirmation, half resolution. “Me no like it” she says, looking determined.

Yet, for about two hours this Saturday, Bloemfontein became just a normal African city.

I was able to forget about the guy writing his PhD about the positive aspects of fascism in Europe.

I was able to forget about the girl who explained to me that it is not possible for students of different races to share the same apartment because the black men do not respect “their” women, so they will just walk in and out of a black girl’s room whenever they please and white parents do not want their daughters to be ‘exposed’ to that (i. e. raped).

I was able to forget that a professor had told me that last year during the racial violence at the University of the Free State (#ShimlaPark), white parents came to campus with their pick-up trucks, armed with baseball bats, ready to beat up black students. That residence managers had to hide terrified undergrads in different campus buildings.

I was able to forget about the three white post-graduate students who gave a theatrical presentation on how black students perceived these incidents on campus last year, well-meaning and yet totally oblivious of their own positionality in all of this. Whitesplaining should be a word in this country.

And yet, research on identity among local students also reveals a darker, self-deprecating side. When no one else listens, students will say things like “I am ashamed of my skin colour. I am ashamed of being white.” I wonder how much of the white anger is due to this deep feeling of inadequacy, this not knowing how to “be” in this “New South Africa” and where else to be if not here. If 1970 was a place, I suspect quite a few white South Africans would want to emigrate there.

It all comes back when we reach the mall. All of a sudden 15 muscular young white men in shorts walk into the mall and start singing. I am legitimately scared for a second (anything sung by 15 males in shorts sounds like a war song), before realizing that it is probably just a bachelor party. The tension messes with your brain here. Everything looks threatening when you are constantly told to be scared.

As we walk down the aisles and look at shop windows, I decide to follow up on our earlier conversation. “So, Alamnesh, you do not like this city?” She smiles “I do like it.”

The mall is a safe place.

I’m a trained translator (MA), Conference interpreter (MA), Interpreter trainer (MAS) and researcher (PhD, University of Geneva) with an interest in development anthropology, ethnography and technology. Currently Director of the Language Centre at the University of Fribourg, Switzerland View all posts by CarmenDelgado

2 thoughts on “The Bloem Diaries – Part 1: Race and the city”